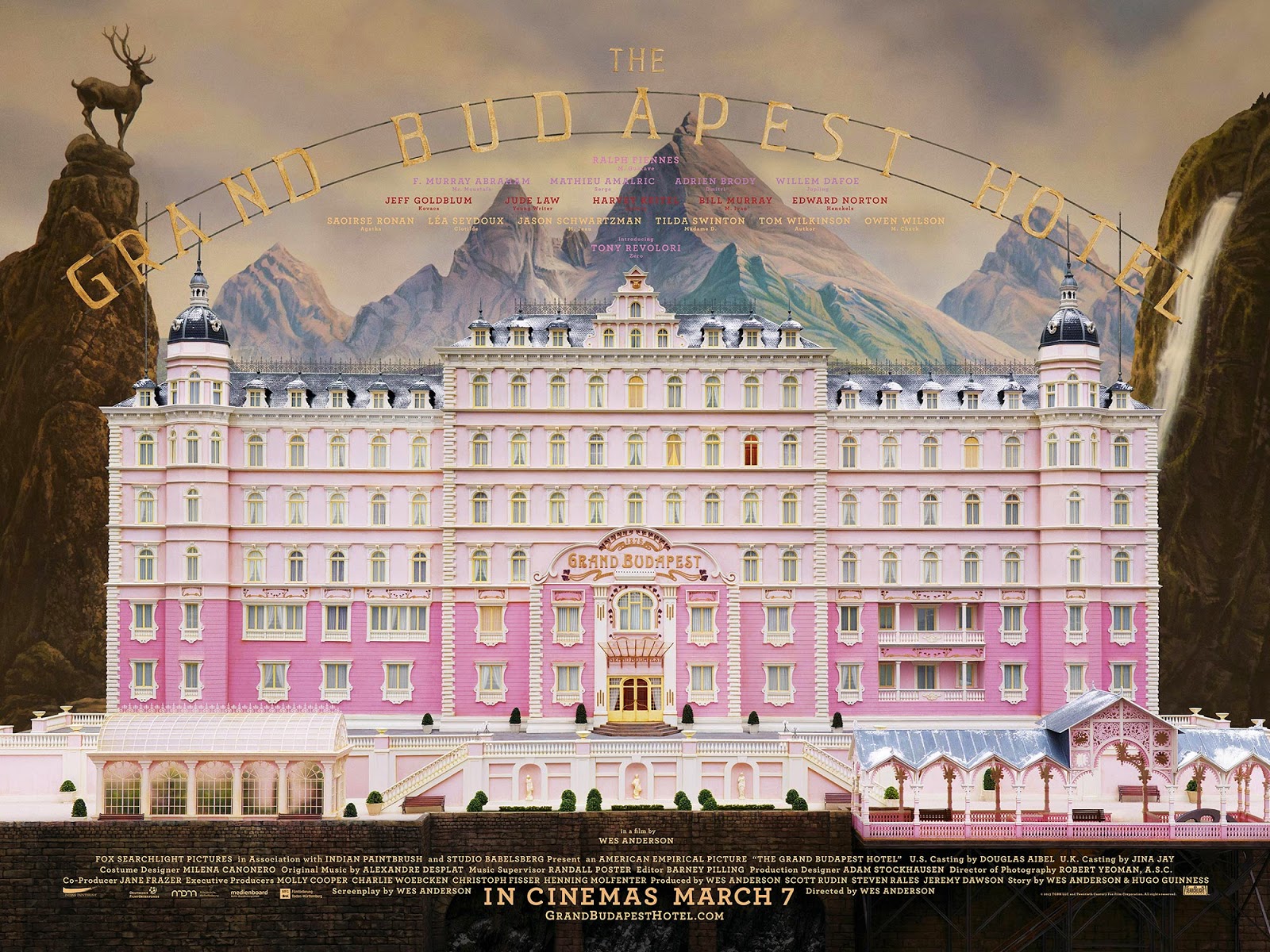 Beth and I went and saw Wes Anderson’s newest film, The Grand Budapest Hotel, at our customary and preferred pre-noon showtime. In attendance were a healthy set of other 30 somethings and a substantial number of significantly older clientele. I love Anderson’s films without reserve. This one did not disappoint; in fact, it has stuck with me in peculiar ways.

The film is typically quirky, beautiful, and flagrantly not of this reality: set in a made-up eastern European country, it takes place slightly before a large conflict that draws from both the first and second world wars. The external, wide shots of the hotel and many of the sets are clearly models — though exquisitely detailed ones. The story floats through history, moving us back in time somewhat quickly. At the beginning, a young woman visits a statue of a dead author, paying tribute as the snow falls around her in a somewhat drab courtyard. She holds a book -�The Grand Budapest Hotel - by ‘The Author.’ We see a picture of him on the back cover, than cut to him behind a desk, alive and recounting how he came to the story of the hotel and its owner (and seemingly breaking the fourth wall as he describes storytelling). These scenes are all shot in a typical, modern aspect ratio. We cut to the past, where Jude Law plays a younger version of The Author. The aspect ratio changes and Law becomes the narrator. We learn a little about the hotel, a quieted place of fading glory, ornamentation discarded for brute utilitarianism; and of its proprietor, Zero Mustafa. Zero recounts how he came to the hotel as a lobby boy, and we shift further back in time. F. Murray Abraham, who plays the older Zero, takes over as narrator. Zero, now played by Tony Revolori, is a refugee from an unnamed somewhere. The casting is smart — in no human world does Revolori grow into Abraham, but both convey otherness and outsider. We meet his flirtatious, bisexual, at times well-mannered and at times flagrantly vulgur mentor M. Gustave, portrayed with brilliant aplomb by Ralph Fiennes. The aspect ratio changes again — this time dramatically, to one slightly taller than wide. A striking, uncommon effect. The combination of shifting aspect ratios and narrators helps the viewer organize the periods of the film, but also confuses. A neat way of depicting the manic and wily sands of memory, transposing and mixing up bits and pieces of recalled experience.

The story goes off the rails from there — in fun and memorable ways. There’s a thug who removes some of another character’s fingers, a love story between a savant baker and Zero, a prison break, incredible sets and many, many familiar faces. To describe any of it in detail would be tantamount to pilfering little bits of delight. Like all Anderson films, there’s subtle humor, detail, and insane exposition.

So why’s it bugging me? I’m not sure. Anderson doesn’t address the obscenities of history directly, but lightly and from glancing angles. This pisses people off (not me), especially those who think Anderson’s films are superficial nods to aesthetes. There are palpable senses of loss and longing: for older Zero, an understandable one; an equivalent saudade for Gustave, who by wily strength of charm maintains his bizarre interpretation of old-world decorum and propriety at the Hotel. He lives by a code, as it were, and watches the world crumble around him.

The melancholy extends to the connection between Zero and Gustave, to the Hotel and the world it represented, and to a perceived brightness of a forgone time. It permeates throughout the film and ultimately gives way to an acknowledgement of passing. If Anderson’s worlds of whimsy are creations of joy, then the drab scenes set in the ‘present’ of the film (mid-80s) and in the recent past of Law’s Author seem to come from a muted woe daubed with signs of former glory.

That last bit sounds remarkably abysmal — it’s not, at all. I’m keen for a repeat viewing. The film’s a delight and the best I’ve seen in quite a while.