The Atlantic has an amazing collection of photographs of Beijing’s sky during these last few weeks of intense PM pollution. Particularly striking are the before-and-after shots, which on their site allow you to fade between polluted and less polluted days. One is adapted below, but check them all out. 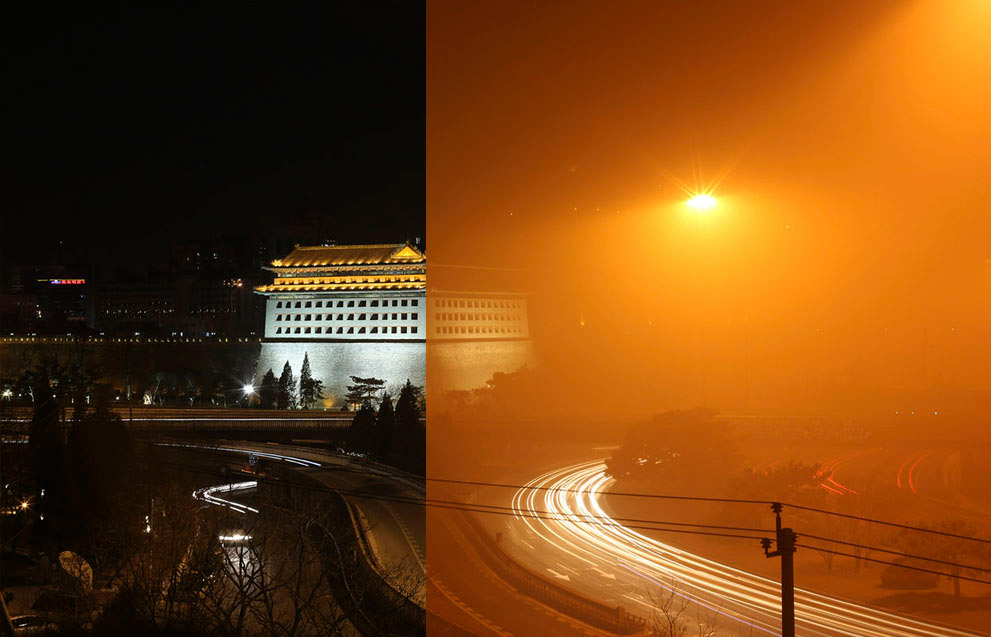 Since the beginning of this year, the levels of air pollution in Beijing have been dangerously high, with thick clouds of smog chasing people indoors, disrupting air travel, and affecting the health of millions. The past two weeks have been especially bad — at one point the pollution level measured 40 times recommended safety levels. Authorities are taking short-term measures to combat the current crisis, shutting down some factories and limiting government auto usage. However, long-term solutions seem distant, as China’s use of coal continues to rise, and the government remains slow to acknowledge and address the problems.

The focus, of course, has been on Beijing, but astute observers note that it is hardly the most polluted city in the country. As a result of the widespread pollution – which has been getting remarkable coverage in the mainstream media – Chinese activists, educators, and policymakers are speaking out.

“I would not call the past 40 years’ efforts of environmental protection a total failure,” he said. “But I have to admit that governments have done far from enough to rein in the wild pursuit of economic growth … and failed to avoid some of the worst pollution scenarios we, as policymakers, had predicted.”

After three decades of worsening industrial pollution resulting from rapid urbanisation and industrialisation, China has accumulated huge environmental debts that will have to be paid back, Qu said.
He said recently he regretted that some of the very forward-looking strategies – emphasising a more balanced and co-ordinated approach to development and conservation, that were worked out as early as 1983 – were never put into serious practice when China was still at an early stage of industrialisation.

Pan Shiyi, “one of China’s highest profile antipollution warriors” and a real estate mogul, asked Chinese bloggers and social media users to vote on whether or not China should enact national clean air legislation. According to the WSJ’s China Real Time Report,

In less than 10 hours of voting, nearly 32,000 microbloggers have said they agree with real estate mogul Pan Shiyi’s call for China to implement a clean air law. Fewer than 250 said they were opposed, while just over 120 said they weren’t sure.

As of a few minutes ago, 46,353 people had participated in the poll. A drop in the ocean, but a start.

Finally, according to the Times, the Beijing government is taking steps to curb emissions in the capital. The state run news agency reports that 180,000 old vehicles will be removed from the road; the heating systems of 44,000 old, single story homes and coal-burning boilers downtown will be replaced with clean energy; and 40% of Beijing will be forest covered in the next five years.

The city also plans to reduce coal consumption by 1.4 million tonnes and volatile organic compounds emissions by 8,000 tonnes, in addition to closing some 450 heavily polluting plants, according to municipal authorities.
Reasonable measures, but not ones that will occur rapidly. And, as mentioned, this doesn’t help much with the other, equally or more heavily polluted cities throughout the country.